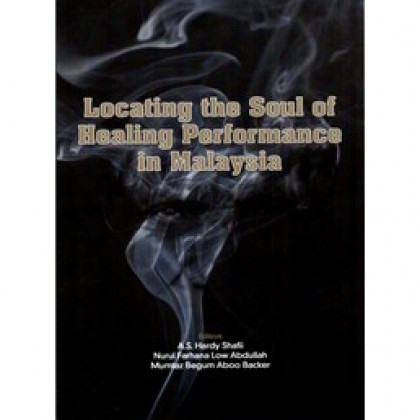 RM18.00
Locating the Soul of Healing Performance in Malaysia

Locating the Soul of Healing Performance in Malaysia will bring to the fore fundamental principles of healing performance practices in Malaysia which were once the soul of the communitys spiritual health beliefs. Healing performances in Malaysia have been performed, celebrated and reconstructed for many generations even before the advent of Hinduism and Buddhism in Malaysia, approximately since the 4th5th century ad. These practices played an important role within the sociocultural context of ancient communities, as their traditional beliefs and world view accepted that the supernatural and the nether world coexisted with human beings in a parallel universe. This underlying acknowledgement of the unseen thus forms the basis of traditional Malaysian performance healing its soul be it healing in the physical or the spiritual and emotional context. Herein lies the difference between traditional healing in the Malaysian context compared to the western perspective.

The different articles in this book will explore the elements and dynamics of various types of healing performances as well as the role and functions of shamans/healers in main teri, bageh, bobohizan, bebayuh, Thaipusam, sewang and kuda kepang mabuk. The inclusion of non-Malay forms of performance healing represents a major contribution of this book to previous studies in the area as the various articles rekindle discussion on a gradually vanishing resource of local knowledge while pointing towards a return to a shared heritage in confronting contemporary physical, mental and spiritual health issues. The collective ethos at the same time celebrates the diverse belief systems in Malaysia which on the whole remains united under an unstated respect for the existence of the supernatural and the nether world.

The Relevance of Science to Local Knowledge
RM25.00